Fishing for Steelhead in the Great Lakes is a lot of fun.  West Michigan has many different streams that get a run of Steelhead in it allowing anglers the chance to hook one of the hardest fighting fish in North America.

The Pere Marquette is one of the few  un-dammed rivers in the state of Michigan allowing natural reproduction of salmon and Steelhead.  The flies only section of the PM is a favorite of many anglers.  This section of the river is a catch and release section for all species of fish caught.

On my last outing to the PM I hooked 4 and landed 3 fish.  Two nice Steelhead one was about 9lbs and 2 nice browns over 20 inches. The day was perfect for fishing. It was 28 degrees and clear skies.  When I arrived at 7 the lower parking lot was almost filled.  I quickly got my gear on and headed to the river.  First glance told me that a lot of the prime locations were already taken.  I walked down to a couple of areas that were not occupied and began to fish.  Cast after cast resulted in nothing.  The sun hadn’t gotten up on the river and it was cold.  I walked downstream to another area to try it.  I kept casting and after about 30 minutes I hooked into a nice fish (see attached picture)  that fought like a fall run Steelhead.  That fish took me down stream hard 2 times and fought like it was 15lbs not 9.  After what seemed like an eternity in the fight (12-15 minutes) I slid the buck up onto the bank.

After I released the fish the sun started to come up on the river.  The sun rays lit up the river and the forests with a splendor only God can create.  I stood there soaking in the beauty of the Creators majesty.  The river gurgling, the birds singing and the wind blowing through the trees made it a place to soak in the goodness of God.  This is a place where I often meet God in a special way.  No music, no preaching; just enjoying the beauty of the throne room of the Creator.

Psalm 19:1 The heavens declare the glory of God; the skies proclaim the work of his hands.

Romans 1:20   For ever since the world was created, people have seen the earth and sky. Through everything God made, they can clearly see his invisible qualities—his eternal power and divine nature. . . 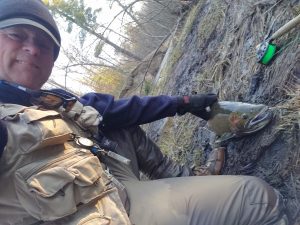 1 thought on “Steelhead Fishing on The Pere Marquette River”